An essay on why dogs belong in cities. 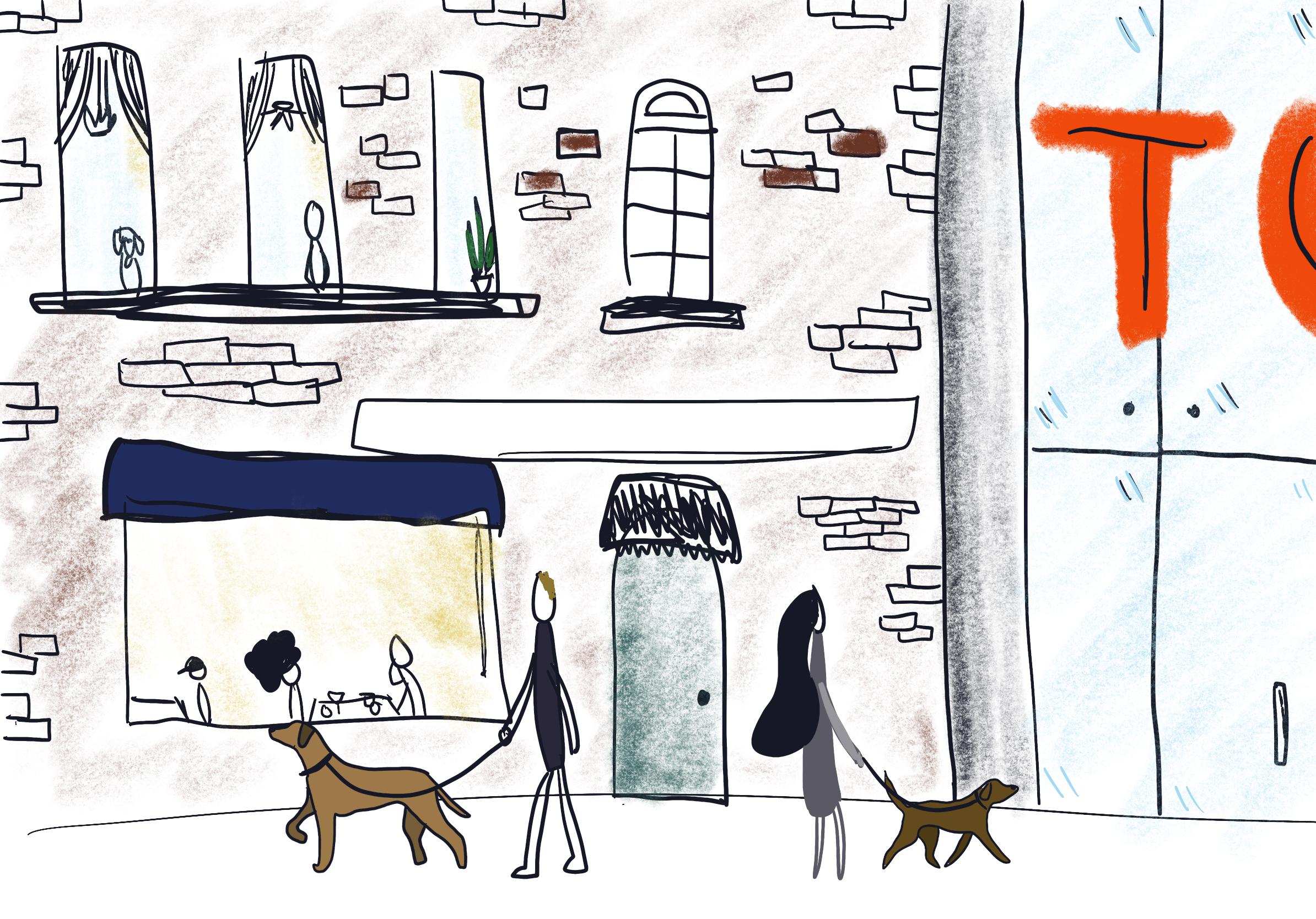 It's been a while since I've written here, for a variety of reasons. Work has been wildly busy with a quickly growing team and managing various ongoing projects (some of which are set to launch soon). Balancing that, along with a rapidly growing puppy with a few trivial recent visits to the vet, writing on the blog, Matcha & Mochi, has not been at the top of my priority list. Now that some of that is winding down, I'm able to finally write about a topic that has been occupying my mind recently, which are my thoughts on what it's like having a medium-large sized dog in a ~800ft2 apartment.

I live in a big city with a population of over 3 million and a downtown density of about 8,500 per square kilometre (for comparison, Manhattan has 25,000/km2). Living in the city, you see tons of dogs. There are little dogs in strollers that are more accessory than pet, big dogs that could ridden like horse by a toddler, three legged dogs, dogs in wheelchairs, and in the past year, lots and lots of puppies. I, myself, got a black Labrador puppy back in January of 2021, and when I tell this to people, who are not from a city, their usual response is "but you don't have a backyard". After being in the city for the past ~5 years, and not having access to my own backyard for the entire time, this sentiment has always puzzled me. Why do I need a backyard to have a dog? Is a dog not better off in a dedicated park with others to socialize with? For some reason, people from outside the city seem to have this idea that you can't have a dog that requires lots of exercise, in the city. To me, the entire notion of not being able to have a proper dog in the city makes no sense, and I call it The City-Dog Fallacy.

You don't need a backyard to have a dog. This is hard for some suburbanites, and even city-dwellers to comprehend, but allow me to illustrate the benefits of actually not having a backyard. The backyard is not an oasis for your dog, like you may think, but rather an expensive, open litter box. The green space behind your house is unlikely to be big enough for your dog to get all of the exercise it needs in a day, so what ends up happening? You let your dog out to go number 1 and number 2, to which you don't even end up cleaning up right away. The waste sits there in the backyard until the weekly cleanup you do on Sunday. Now what about city dogs? City dogs go to the bathroom on the street or in a park, where it is required by law, that you clean up after your pet. I would hypothesize that dogs in the city get 2-3 more walks per day than the average suburban dog. The fact that you can't just let your dog out to do it's business, just to come back inside a sleep until it has to go back out again, forces city dog owners to take their pet on more walks and give them more exercise, as well as removing waste from living quarters, resulting in a healthier dog and cleaner homes.

Dogs are actually better off in cities. Take a walk around any dog park in the city any you'll nearly always see dogs running around, chasing each other, rolling on the ground playing – a sight you rarely encounter outside of dense urban areas like downtown Toronto. Dogs in the suburbs, in my opinion, are far less well socialized than their urban counterparts. At the park, dogs learn how to play with other dogs and get to enrich their canine social lives. And during the walks mentioned previously and trips to the dog park, they end up getting far more exercise than that of one big walk per day and a few trips to a backyard. So when you compare the daily routines and overall life of the suburban and the urban dog, the one where there is far more social interaction and abundance of exercise, is that of the city dog.

You, and the city, are better off with dogs in it. Let's begin with you, the dog parent. You benefit greatly from having a dog in the city. Not only do both the suburban dog dad and the city dog mom get to have the unconditional companionship that comes with a dog, but it enriches your social life as well. After getting a dog of my own, I gained access to the exclusive social club for parents of dogs. I noticed that when you take your dog to the dog park or out for a walk, there's no longer a barrier for entry to have those friendly neighbour interactions. With a dog, you also have access to the social circles that exist within the gates of a dog park. Similar to what must happen when parents take their kids to a neighbourhood playground, there is a commonality for all of the adults, to which a conversation can be started and acquaintances can be made. And during a year where new social interactions were particularly difficult, having a dog to break the ice was so healthy.

Cities populated with a healthy amount of dog owners also largely contribute to safer streets and public parks. Jane Jacobs wrote extensively, in her book "The Death and Life of Great American Cities", about sidewalk safety and it's close relation to how well occupied and monitored the sidewalks are by the community that resides there – to which dog walkers play a huge part. Evenings in suburbia are silent and the streets are empty, and therefore are unregulated by the community meant to keep the sidewalks safe. In the city however, many dog owners must take their pets out for their evening walk and in doing so, the walks end up staggered throughout the evening which provide the streets and sidewalks with plenty of eyes to watch out for, and deter, all sorts of shenanigans which may otherwise take place. I've seen this in action too. One evening during the most recent winter, I was out for my evening walk, long after the rest of the cities residents had gone home, when another dog walker and myself spotted a man laying down in the park laying motionless. He was unresponsive and alone. The ambulance arrived roughly 5 minutes after we called and he was taken away by paramedics. Though we don't know what happened to the man after he was taken to the hospital, I can confidently say that in a town where everyone has a backyard, this man surely would have not been found until the following morning.

Two pieces played a part in this scenario, (1) the park was well lit, (and 2) the sidewalks were populated well enough by citizens to come across this man in a short enough amount of time that he didn't freeze all night. It's obvious to see that in a season such as winter, the dog owners haven't the option to just let their dog into the backyard, and the residents who have dogs in condos must take to the sidewalks with their dog, making them much safer for any others that may be occupying them.

This essay was aimed mostly for sceptics of the city-dog, and to put into words the understanding that other urban dog owners already have. The way dog owners in the city and in the suburbs behave and care for their pet are totally different. Suburban folk largely confine their dog to the house and backyard, except for the 1-2 walks they go on in a day, whereas the city dog parent is encouraged to take their dog on 4-6 walks in a day and occupy the myriad of dog parks throughout the week that they have access to, and let their dog socialize. Not only is the dog socializing on these walks and trips to the dog park, but it allows you to socialize as well. On top of all of this, having a dog in the city ensures that the city sidewalks and parks will largely have a continuous stream of residents of the community occupying them through the multiple walks that they must take their dog out for. The city may seem like a concrete jungle that unfit for an animal, but you'd be surprised at how great of an environment it actually is for your canine companion.