Some thoughts after running 1000km

Most people that I talk to hate running; I know I did a few years ago when I started. I tell those people this: "No one gets up one day and decides they love to run – it's like wine, beer, and coffee; it's an acquired taste." It's something that you grow into, or rather grows onto you. It becomes something that you look forward to and gives you energy rather than depleting it.

When I started running regularly, in March of 2018, I had no end goal – nothing that I was working towards. I wasn't trying to get in shape or prove anything to anyone; in a sense, I think that I was metaphorically running away from something. In 2018 I began dealing with emotionally challenging situations that I had never had experience with and didn't have any idea of how to cope with emotions of that caliber. Talking to a therapist is something that I should have done earlier but didn't, and wasn't sure how to talk to friends or family about my anxieties. Feeling alone, I took up running; something I could have full control over and do in isolation.

As time went on and as things slowly got worse for me, my runs grew increasingly longer. I pushed myself harder out of necessity, all of which happened subconsciously and by accident. There was more conflict in my mind than ever before so I spent more and more of my spare time running.

Below, you can see my progression over time. My average pace got faster and the average run distance got longer. 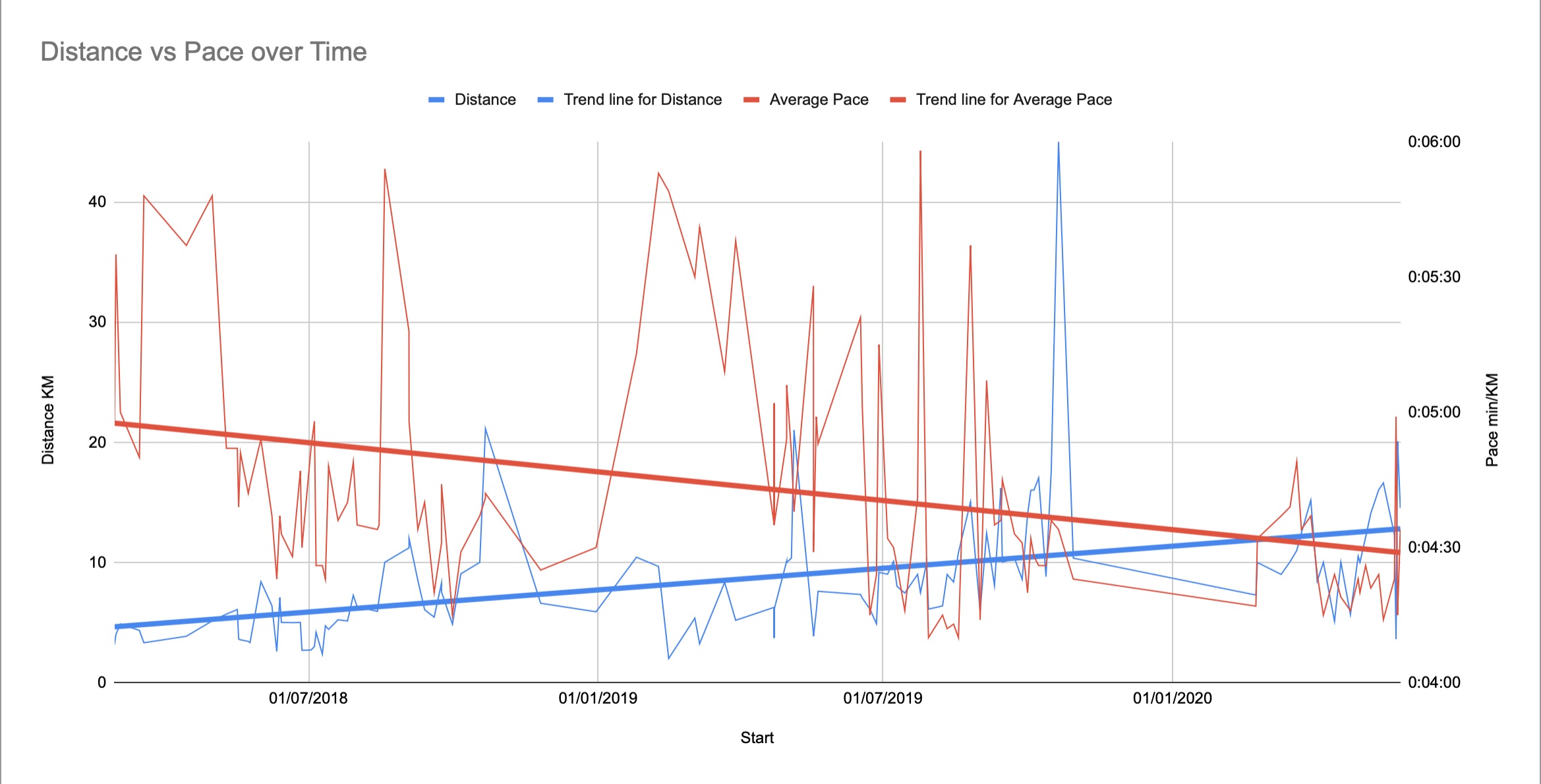 year and a half later I ran my first full marathon, and a few days ago I passed the 1000km mark. Finishing that first marathon felt very symbolic, like I had finally conquered the problems that had initially drove me to running in the first place. As I reflect on running 1000km, something that I had never thought I could do, I think about all that has happened during that time. Heartbreak, saying goodbye to my dog, the current COVID-19 pandemic; through all of these I ran. It kept me sane while I wrestled with complicated emotions and tried to plan my next step.

There's something beautiful about running. It's a sport/activity that's very attainable – it requires little to no cost to start. You can run fast or you can run far, but the only thing keeping you from being better than the person next to you is pushing more and working harder. You don't have to be the smartest, tallest, biggest, most beautiful, richest; you just have to want it more. This sort of mentality has come in handy when I think about how I go about life.

Running transformed from being just a form of therapy into time where I work through problems in an abstract way. It's not time for thinking critically but letting my mind wander to make connections between different ideas and thoughts; a topic I discussed in my previous post. Whenever I have a tough day at work, whether it's a complicated problem with the team or I'm stumped on a technical problem, going on a long run usually ends up helping.

I've learned a lot about myself while running along the Toronto waterfront. I no longer struggle with the same issues that I did when I started and running was a big reason that I was able to get through that time in my life. Running became the way that managed my emotions and worked through my problems. It's time on my own to think, reflect, plan, dream, and distance myself from the bad stuff. When I think about it I'm not sure where I'd be without running, it's changed my state of mind and how I work through problems. I'm not only healthier physically, but mentally as well. I feel more capable of taking on new challenges because I have something like running to help me through the toughest parts.